Sharing and saving seed is a crucial part of traditional farming all over Africa, writes Heidi Chow. Maybe that’s why governments, backed by multinational seed companies, are imposing oppressive seed laws that attack the continent’s main food producers and open the way to industrial agribusiness. But Ghana’s women farmers are having none of it.

“My mother gave me some seeds to plant. And I’m also giving those seeds to my children to plant.

“So that is ongoing, every time we transfer to our children. And that is how all the women are doing it. We don’t buy, we produce it ourselves.”

Sitting together in the heat of the Ghanaian sun, Esther Boakye Yiadom explained to me the importance of seeds in her family and the transfer of knowledge between the different generations of women.

Esther continues to explain the role of the community in sharing and preserving seeds: “I am having tomatoes and I don’t have okro. And another woman has okro. I’ll go to her and then beg for some of her okro seeds to plant.

“And then if another person also needs tomatoes from me and I have it, I’ll have to give to the person. Because you know every season changes, because maybe mine will not do well. But that person’s will do well. So next season we can get to plant. That’s why we exchange them.”

An oppressive new law is putting all this under threat 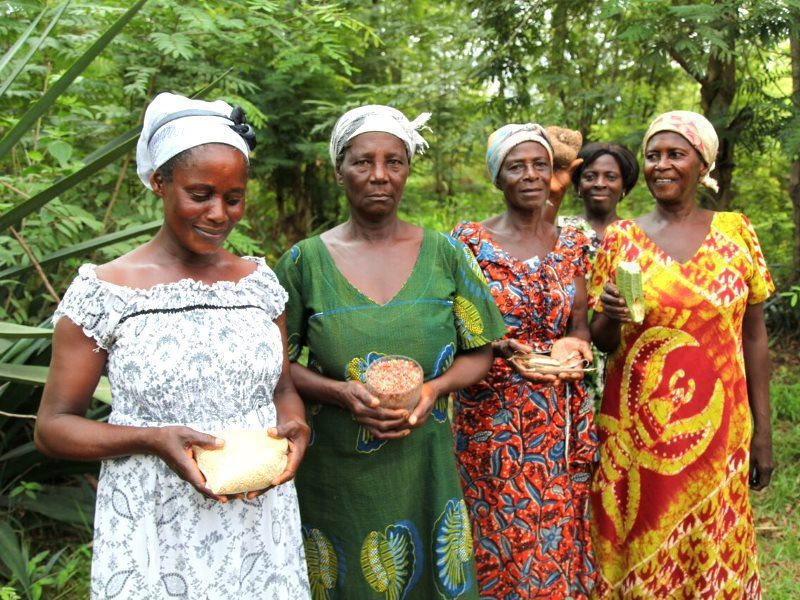 The ability to save and exchange seeds after each growing season is an age-old practice that ensures that small scale farmers have seeds to sow the following year.

The seeds are free for the farmer and they have the knowledge of what seed is required, for what conditions and the different tastes that complement the food they cook. Where they do not have a particular seed, they can ask other farmers in the community to share seeds.

Keeping seeds and sharing seeds is essential for sustainable livelihoods as well as ensuring communities have access to nutritious and culturally relevant food. But this is all under threat by a proposed bill – dubbed the ‘Monsanto Law’ – in Ghana.

Its effect would be to bolster the power of multinational seed companies whilst restricting the rights of small farmers to keep and swap their seeds.

This Bill will see the control of seeds being transferred away from small farmers and into the hands of large seed companies.

Today just ten corporations control more than 75% of the world’s commercial seed market, although in Africa an estimated 80% of all seeds still come from farmer-managed seed systems – where farmers save, select and swap their own traditional or indigenous seed varieties.

Farmer-managed seed systems help to protect bio-diversity as farmers keep a wide variety of seeds. Seeds are selected both to maintain yield but also to preserve traits which respond to different climatic conditions, have certain tastes, appearance and storability.

Commercial seeds, by comparison, are produced for high input mono-cropping farming systems and designed to produce high yields through the application of chemical fertilisers and pesticides.

Packages of commercial seed and chemicals has an economic impact on small rural farmers who have traditionally had very low input costs as well as environmental and health impacts. Victoria Adongo from Peasant Farmers Association of Ghana told me about the health complaints that her members have faced:

The proposed legislation poses an attack on the way of life to so many farmers in Ghana and is one of the commitments that the Ghanaian government has made to be part of the G7’s New Alliance.

At the end of last year Global Justice Now exposed the role of the UK government in the New Alliance and their complicity in this attack which led to a series of questions in our parliament as well as a popular parliamentary petition.

The G7 New Alliance claims to address food security and nutrition in Africa in a decade but the scheme has been widely condemned by African civil society and farmers groups as a “new wave of colonialism.”

Instead of supporting small farmers across Africa, the scheme facilitates a grab for resources – such as land and seed – for multinational corporations who see Africa as the last frontier for untapped markets.

The ‘Monsanto law’ is a clear example of how the New Alliance is making it easier for large seed companies to get a foothold in Ghana at the expense of small farmers and if anything will reduce food security as farmers are restricted from saving and preserving seeds.

Opening the door for GMO crops

The proposed seed legislation will also help open the doors to GMO crops in Ghana which is currently being fought in the courts as campaigners challenge the application for authorisation of BT rice and cowpeas.

Cowpeas are an important staple for Ghanaians and is a key feature in many Ghanian dishes but is also a key nitrogen fixing crop, used by many practitioners of agroecology for intercropping and maintaining soil fertility without having to purchase chemical fertilisers. Corporate control of this essential seed would prove disastrous.

As I travelled around Ghana this last couple of weeks, I met many farmers and communities who echoed Esther’s sentiments around seeds. I also learned that the freedom to keep seeds went beyond issues of growing food and providing nutrition, seeds also have cultural and spiritual significance for many communities.

Patricia Dianon, president of the for Rural Women’s Farmers Association of Ghana, in the Upper West region of Ghana told me: “We use them when we have funerals, we put the seeds around the funeral sites, that is the last respect for the dead.”

She explained to me how they send off their loved ones with seeds so that they have them for the afterlife – underscoring the importance of seeds being the source of sustenance, even for those who have passed away.

Did anyone ask the farmers what they wanted?

Yet the corporate agenda for seeds – as pushed through by the New Alliance, the Gates Foundation and British aid funds – is one where farmers are treated as passive consumers of corporate-controlled seed instead of indispensable knowledge bearers of seed varieties and protectors of seed diversity.

This agenda ignores the cultural importance of seeds and the economic impact on small rural farmers who would have to spend money on purchasing seeds year after year, becoming dependent on big seed companies when they have always had access to their own seeds – free of charge.

The G7’s New Alliance claims to support food security but the way to build food security isn’t by eroding the rights of small farmers to their seeds.

The good news is this agenda is being challenged in Ghana and on my trip I also met different civil society groups, rural women networks, unions, faith groups and farmers organisations that are actively fighting to protect the rights to their own seeds and the freedom to protect their way of life.

Their relentless organising, protesting and petitions led to a halt on the legislation. But it’s not over yet and any day the bill could come back on the agenda of the Ghanaian parliament, so the movement remains vigilant.

We will continue to stand in solidarity with the food sovereignty movement in Ghana and challenge the complicity of the UK government.