THERE HAVE BEEN NEWS OF THIS DEATH IN SEVERAL ONLINE SOURCES FROM ETHIOPIA.  HOWEVER, AS OF APRIL 25, 2016, WE WERE ALERTED POSSIBLY THIS IS A RUMOR BUT IT HAS NOT BEEN CONFIRMED AS YET IF HE STILL DEAD OR ALIVE.  IT SEEMS ETHIOPIANS WANT HIM DEAD SO THEY HAVE TAKEN TO THE MEDIA TO WRITE THEIR OWN STORY?  PLEASE CONTACT US TO SHARE THE FACTS:

Ethiopian breaking news: According to the news from Zimbabwe National TV report, the former bloody dictator, Mengistu Hailemariam suffered massive heart attack yesterday and rushed to hospital in Harare. He was already lost his consciousness by the time he arrived. In an effort to revive him the doctors put him on life support for 24 hours and latter he was pronounced dead at the hospital .
Details are being expected as a lot of mourners are being fled to his residence and hospital. 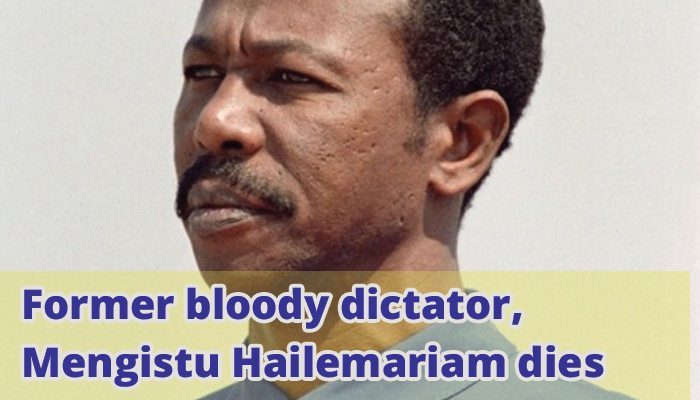 Mengistu Hailemariam has Died at the age of 75. Born on May 21, 1937 Mengistu was a father of three children, Tilahun Mengistu, Tigist Mengistu and Andenet Mengistu. Lt. Col. Mengistu Haile Mariam (born 1937) became the head of state of Ethiopia and chairman of the ruling military government after a 1974 revolution deposed Emperor Haile Selassie. He was also the head of the central committee of Ethiopia’s Socialist Workers Party. Mengistu resigned as head of state in 1991 and fled into exile in Zimbabwe.