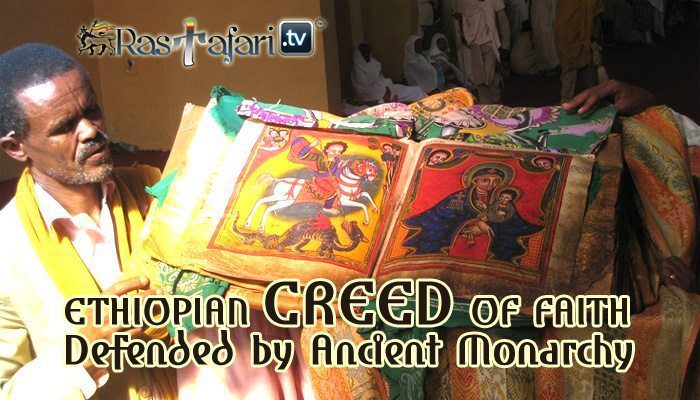 The Ethiopian Creed of Faith Defended by Ancient Monarchy

This is the Ethiopian Creed of Faith, accepted and defended by the World’s Oldest Monarchy as testified by His Imperial Majesty, Emperor Haile Selassie I, Neguse Negast ze Ethiopia, The Conquering Lion of The Tribe of Judah, Defender of The Faith.

We believe in one God, The Father Almighty maker of Heaven of Earth  and all things visible and invisible.

And we believe in the Lord Iyesus Kristos, the only begotten Son of the Father who was with the Father before the creation of the world.

Light from Light, True God from True God, begotten not made  of one essence with the Father by whom all things are made,  and without Him  was not anything in Heaven or Earth made.

Who for us men, and for our salvation, came down from Heaven was made man and was incarnated from the Holy Spirit and from the Holy     Virgin Mariam.

Became man, was crucified for our sakes in the days of Pontious Pilot, suffered, died, was buried, and rose from the dead on the third day, as waswritten in the Holy Scriptures.

Ascended into Heaven into Glory.    He sat at the right hand of the Father and will come again in glory to judge the living and the dead.
And there is no end of His kingdom.

We believe in the Holy Spirit the Lord, the giver of life who proceeded from the Father.

We worship and glorify Him with the Father and the Son who spoke by the Prophets.

And we believe in one Holy Universal  Apostolic Church.

And we believe in one baptism for the remission of sins and wait for the resurrection from the dead,  Life to come.