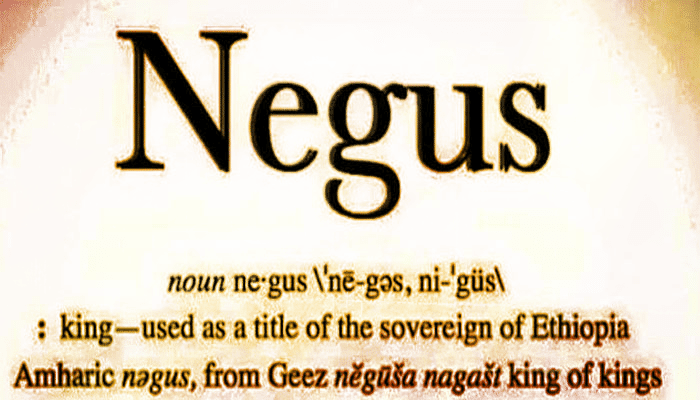 Ignorance and misconceptions abound among Rastas concerning the names and titles of Emperor Haile Selassie I.

The name Haile Selassie which means ‘might/power of the Trinity’ was the Christian baptismal name given to the infant Tafari Makonnen son of Ras Makonnen. As the son of a nobleman he was Lij Tafari Makonnen from 1892-1905.

He became a general in 1905 and so was titled Dejazmach until 1916 when his military title changed to Ras (head of an army). He was Ras Tafari Makonnen until 1928. From 1928 to 1930 he held the court rank of Negus or king and at his coronation he earned the supreme court rank Negusa Nagast (king of the kings of Ethiopia) and opted for his baptismal name as his throne name.

We know this from the biography of His Imperial Majesty (hereafter H.I.M.) written by his personal friend Christine Sandford and titled The Lion of Judah Hath Prevailed. She writes of the Emperor, “He took the throne name of Haile Selassie I. This was his baptismal name, which every child receives from the priest at baptism, and which they may or may not use for general purposes.” [p. 56]

It may be a source of shock to some Rastas to learn that Haile Selassie was not the only Ethiopian called by that name. Sandford also says, “Meanwhile in the house Lij Tafari would be under the care of his guardian Fitaurari Quollach…His companions during these years were his cousin Imeru Haile Selassie, later to become Ras, and Tafari Belaw.” [p.28]

When Rastas greet in the name of H.I.M. they refer to him among other things as ‘lord of lords, conquering lion of the tribe of Judah’. These two presumed titles are the result of mistakes.

‘Lord of lords’ was never ever in Ethiopian history used as a title of any emperor. The title is directly taken from Rev. 19.16 which also has King of kings. Now it needs to be known that in Ethiopia the enduring titles of emperors going back to the 18th century at least were ‘Elect of God’ meaning the one chosen by God to lead the country, and ‘king of the kings of Ethiopia’ (often shortened to ‘king of kings’). Ethiopia had regional rulers, including kings, each of whom would vie for supreme authority as emperor.

The statement, ‘The Lion of the tribe of Judah hath prevailed’, which normally appears just before the imperial name and titles and directly drawn from Rev. 5.5, was used by Ethiopian Emperors on their seals and in their letters to show the Christian nature of the Empire.

The late 19th century Emperor Menelik II, because of mistaken translations from Amharic into European languages, had the motto of the Empire used as part of his imperial title. So he was popularly called ‘Conquering Lion of the tribe of Judah’ or for short ‘The Lion of Judah’.

This tradition prevailed through to Emperor Haile Selassie I as well. During the Emperor’s reign the motto from Rev. 5.5 was used to open all imperial proclamations and decrees, but the opening words of the 1942 proclamation establishing the Negarit Gazeta reads:

“Conquering Lion of the Tribe of Judah
Haile Selassie I
Elect of God, Emperor of Ethiopia
We proclaim as follows:”

Commenting on the English text vis-à-vis the Ge’ez [old Ethiopic] text, Sven Rubenson, writing in the Journal of Ethiopian Studies observes, “There are two important discrepancies here. The Ge’ez motto from Rev. 5 is incorrectly translated. The statement has become an attribute. And as a consequence, the pronoun…‘we’ which in the Amharic sets the motto clearly apart from the names and titles of the Emperor, has been moved after the titles, thereby permitting ‘Conquering Lion of the tribe of Judah’ to become part of the titles. That this can hardly have been done intentionally is indicated also by the full stop after ‘Judah’ in the Amharic version.” (Vol. 3, No. 2, July 1965, p. 85).

So then Rastas who regard Haile Selassie as God because of his titles ‘King of Kings and Lord of Lords’ are simply mistaken and have been led astray by ignorance of basic Ethiopian history. The imperial title ‘King of Kings’ in Ethiopia was a shortened version of ‘King of the Kings of Ethiopia’ and should not be equated with the global ‘King of kings’ used of Jesus Christ in Rev. 19.16.

‘Lord of lords’ was never ever used as an imperial title in Ethiopia and so is completely inappropriate and mistakenly used by Rastas with reference to Emperor Haile Selassie I, no doubt because the expression appears in Rev. 19.16 along with ‘King of kings’.

What we have seen then is that Haile Selassie had no name or title that was unique to him and indeed some of the titles he is said to have by Rastas are as a result of mistakes.