The Lion of Judah has prevailed
Haile Selassie I, Elect of God
King of Kings of Ethiopia

On behalf of Our people, Government and Our-self, We would like to extend Our heartfelt welcome to to all the distinguished Heads of State and Government and to all delegates who are here to attend the Sixth Regular Session of the Assembly of Heads of State and Government of the Organization of African Unity. Your presence at this meeting, in spite of pressing duties in your respective countries, shows the great importance you attach to the Organization of African Unity. We send Our greetings to those Heads of State who have been unable to attend our meeting in person.

We are also happy to welcome the observers and representatives of African liberation movements. When We extend Our greetings to the freedom fighters who are on the battlefield through their colleagues present here, We cannot pass without calling to memory our brothers who sacrificed themselves for the freedom and independence of their countries, fighting against powerful adversaries. 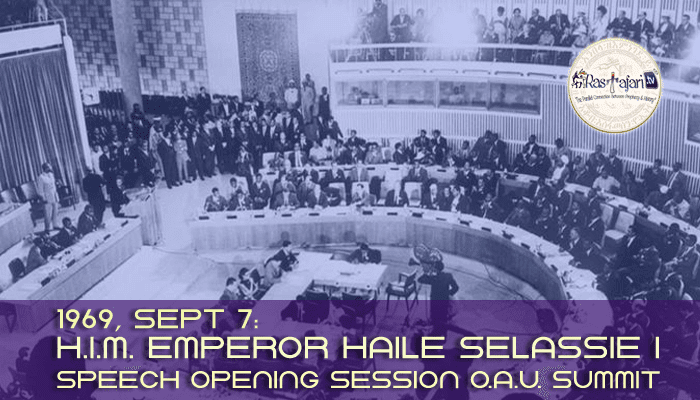 Mr. Chairman, with a young Organization like ours, We believe We must review its past record, on occasions like this, with the view to appraising whether or not it has fulfilled, in some measure, the expectations of its founders. The OAU is not simply a forum where the leaders of African States meet from time to time to exchange views, but it is a very realistic instrument for the maintenance of peace and the advancement of the well-being of the African peoples. Moreover, it is an institution which has already proved itself to be essential. We cannot but recall that before the OAU came into being, critics were quick to point out that the idea of continental co-operation was an unrealizable idea. Happily, they have been proven wrong. The OAU has become a flexible institution serving the peoples of Africa to harmonize their economic, political, social and cultural developments. There have been and will be ups and downs in our efforts to achieve our objectives, but the peoples of Africa and their leaders have realized that only in unity of aims and of purposes can common problems be solved. This is a great achievement. While we should take justifiable pride in what we have accomplished, we must continue to follow the path of co-operation, if we are to fulfill the aspirations of our peoples in all human endeavours.

The OAU has also grown in terms of the structure required to advance its aims and purposes. Among the important decisions of the First Session of the Assembly held in Cairo, Member States signed the Protocol of the Commission of Mediation, Conciliation and Arbitration, thereby committing themselves to solve inter-African problems through an African institution. Although so far not much use has been made of the Commission, we must not minimize the importance of having an institution ready to render its services when the occasion arises. Furthermore, it is by the establishment of such institutions that we can develop the habit of resorting to them as the need arises.

At the Second Session of the Assembly held in Accra, Ghana, another important decision urged Member States not to allow those refugees who flee from independent African countries to conduct subversive activities against their countries of origin. This decision has helped strengthen inter-African relations by removing a cause of friction.

The Fourth Regular Session of the Assembly held in the Democratic Republic of the Congo, after thoroughly discussing the situation that was created by the mercenary phenomenon in Africa, decided to take all necessary steps to expel all mercenaries from the Continent and consequently urged all Member States to see to it that those mercenaries would not return to Africa. We are glad that this has been successfully accomplished. Furthermore, the Kinshasa Summit set up the OAU Consultative Committee on Nigeria in order to assist that country to settle its internal crisis. Following this decision, the Committee has made continuous efforts to bring about reconciliation in Nigeria. In addition, the Fourth Assembly recommended that Member States take a unified stand at the United Nations on the question of the Middle East crisis and help find a solution to it. Last year at Algiers, important issues, like the conflict in Nigeria and the problem in the Middle East were dealt with at length. The Conference had urged the parties involved in the Nigerian conflict to bring the fighting to an end and requested the Federal Military Government to give amnesty to all those involved in the rebellion.

We are now assembled here to discuss important questions which affect the future of our Continent. As we look at the agenda, we find that we are going to sign the OAU Convention governing aspects of the refugee problem in Africa. We know that there are over a million refugees in Africa, who have been divided into two categories. One, those who leave their countries as a result of oppressive colonial rule and two, those who come from independent states to seek asylum in other countries. This Convention is designed to alleviate the economic burden borne by the refugee recipient countries and at the same time to prevent refugees from carrying out political activities detrimental to their countries of origin. The draft Convention which will be presented to us supplements the United Nations Convention on Refugees. It has been carefully studied by the experts and has been approved by the Council of Ministers. We hope that the Convention will help provide solutions to the refugee problem in Africa.

What We have outlined above shows that the Organization is actively pursuing the task entrusted it. We have given much time regarding the various issues inherited from colonial rule and what attempts have been made to provide them with solutions. The fact that we regularly meet every year in order to exchange views on these vital problems affecting Africa is in itself a success. The Organization is fulfilling its raison d’etre. Without minimizing the criticism that can be made of our institution, we believe the service that it has already rendered in some of the most serious political conflicts of our continent, and the fact that the institution can render such assistance, justifies our belief that we are entitled to deal ourselves with our own problems. In so doing, we believe we are discharging a collective responsibility that the Charter of the United Nations permits us to fulfill. As time passes, we shall realize more and more the need for the Organization of African Unity.

Some of the major problems which existed some years ago when we founded this Organization are still with us. Thus, most of the colonial territories which were under colonial and racist administrations are no nearer to their independence now than they were before. On the contrary, the oppressive colonial rule continues unabated. Those past years have proved that the racist and colonial regimes in Africa do not listen to reason. We have learnt once more that bitter lesson that economic sanctions can never be effective against such recalcitrant states unless it is backed up by force. To do this, one has to have the co-operation of the major powers, which so far has become difficult to secure. Ultimately, therefore, the liberation of these territories must remain the responsibility of freedom movements themselves. When we look at the report submitted by the Liberation Committee, the assistance extended to the liberation movements has not been adequate. True, we have economic difficulties in each of our respective countries, but we should make sacrifices in order to assist the movements, for unless our brothers under colonial rule are freed, our own independence remains in doubt. Not only that, world peace itself will ultimately be in jeopardy.

In the economic field, we have made consistent efforts in the past six years to improve our situations. When the Organization was founded, a number of specialized agencies were set up. These organs have submitted studies which deserve our support for their implementation at the national and regional level. In this regard, We are happy to note that steps have been taken to institute regional common markets, customs unions, and to co-ordinate infrastructural developments. These are measures which could truly give sustenance to our aspiration. We should therefore rededicate ourselves in order to see them bear fruit.

The considerations which inspired us to set up our Organization are still with us. The determination of the African peoples to overcome all obstacles in the path of unity cannot be doubted. We must, therefore, intensify our cooperation within the structure of our Organization. Our problems are similar; we have to raise the standard of living of our peoples, eradicate illiteracy, expand medical facilities, improve agricultural and industrial developments and many other similar necessities. Africa has remained the source of raw material. But she has no say over the determination of the price of her resources. We can remove this situation only by sustained co-operation. Not long ago, the Tenth Anniversary of the Economic Commission for Africa was held here, when important decisions in the field of economic affairs were taken. These decisions will be submitted to the Assembly of Heads of State and Government for political support. Such a collaboration between the two organizations – the OAU and the ECA – will bear fruit only if we extend to both our full support.

Before concluding, We would like to stress that at this Session, we must exchange views frankly on the Nigerian crisis – with the determination of finding a solution satisfactory to all. The situation in the Middle East continues to move from bad to worse as a result of the non-implementation of the United Nations Security Council Resolution. The situation is so fraught with danger, not only for the countries concerned and the major powers as well, that it is incumbent upon us to find a solution to this long standing conflict on the basis of the United Nations Security Council Resolution of November 22, 1967. Finally, We would like to reaffirm once again that Ethiopia is prepared to participate fully in all these issues and to contribute her share in finding acceptable solutions.

Distinguished Heads of State and Government,

We would like to thank you for listening to Our statement, and We pray to the Almighty to bless our deliberations. Long live African Unity.