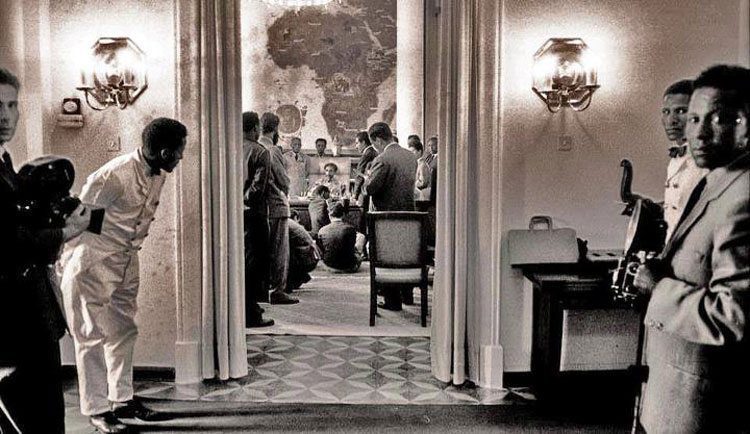 “The first conference of the independent African states was held in Accra, Ghana, on April 15, 1958. It was decided then to celebrate this historic day as African Freedom Day. Until recently, April 15 was celebrated throughout our continent as African Freedom Day. However, two years ago today n May the Summit Conference of the Independent African States, which was convened in Our Capital City of Addis Ababa, decreed that May 25, the day on which the historic Charter of the Organization of African Unity was signed, be celebrated every year as African Liberation Day. Accordingly today is celebrated as African Liberation Day.

The African Unity Charter was signed two years ago today. Within this brief period much has been accomplished that augurs well for African Unity. In accordance with the resolution of the first Assembly of African Heads of State and Government held in Cairo last year, the headquarters of the Organization of African Unity has been established here in Addis Ababa. Under its Secretary-General, His Excellency Mr. Diallo Telli, of Guinea, the Organization is successfully discharging its responsibilities and commitments.

This year, two sister African states Zambia and Gambia have won independence and they have joined the family of independent African states. We share their joy and we extend again, as we did on the occasion when they won their independence, Our sincere felicitations. We are anxiously awaiting the day when those Africans in the dependent territories break the shackles of foreign tutelage, and become masters of their own fate.

On this solemn day, all of us must pause and remember the plight of our African brothers who are under foreign rule and who are desperately struggling to win their freedom, their basic fundamental human rights. Instead of granting their rightful freedom and independence to the indigenous Africans in Angola, Mozambique and Portuguese Guinea, the Portuguese Govemment has intensified even more its campaign of ruthless suppression of African freedom fighters in these territories, under the outmoded, illogical pretext that these territories are part of Portugal. In concert with the other African members of the United Nations Organization, Ethiopia has never ceased advocating at United Nations and other international conferences that the Portuguese Government should grant independence to each and every territory under its rule.

The United Nations Anti-Colonial Committee of which Ethiopia is a member, is presently visiting Africa to follow closely the dangerous situation in Southern Rhodesia. In South Africa and in South-West Africa, the policies of apartheid and oppression are becoming increasingly unbearable. The South African Government is accelerating its ruthless campaign: a methodical campaign of arresting daily, detaining without trial and torturing the Africans and their leaders who are struggling for the their fundamental human rights and freedom. All the peace-loving countries of the world must act together to force the colonial governments of South Africa and Portugal to desist from these policies – policies which are inhuman, policies which deny basic human rights, policies which are detrimental to the peace and security of the entire world and grant independence and freedom to these oppressed people.

The Assembly of the African Heads of State and Government has authorized the Foreign Ministers of Senegal and Algeria to bring the cases of racial discrimination and oppression in South Africa, the inhuman colonial rule of the Portuguese Government and the dangerous situation in Southern Rhodesia, before the Security Council of the United Nations to find permanent solutions to the unrelenting struggles of the African governments and people. As a result the entire world is today more conscious of these pressing problems.

From discussions in the United Nations in recent years, We have cause to believe that some friendly nations fully support the efforts to impose an economic boycott on South Africa and Portugal; it is unfortunate that some great powers who have been entrusted with the maintenance of international peace and security have not co-operated inthese worthy efforts. These powers are the main obstacles to an effective economic boycott of South Africa and Portugal.

The establishment of the Organization of African Unity, the concerted action of the member-states and the pooling of the aid to Our brethren African freedom fighters, have helped to revive and strengthen as well as intensify the liberation movements throughout Africa. For this we are grateful to the Liberation Committee of the nine African States, of which Ethiopia is a member. On this day, we should all recollect with gratitude the support of all those friendly nations in our endeavour in the United Nations and other international conferences to free Africa of all the colonial vestiges.

It will be recalled that the Cairo Assembly of the Heads of State and Government decided to convene the Second Assembly of the Heads of State and Government in Accra, Ghana, in September this year. Because of misunderstandings among certain member states of the Organization of African Unitys voices have been occasionally raised recently against the convocation of the Assembly in Accra. Nonetheless, the regular Assembly of the Heads of State and Government was, in the first place, designed to find peaceful solutions, through deliberations and frank exchange of views to such misunderstandings among member-states. We believe, therefore, that any change in the venue of the next Assembly will make no major difference. Consequently we have dispatched our Minister of State for Foreign Affairs to West Africa, with personal messages from us, to mediate vith the leaders of the West African states concerned.

We earnestly hope that the member-states of the organization of African Unity will meet in Accra in September in accordance with the decision of the first Assembly of the Heads of State and Government. On this day, we extend our fraternal greetings to all our brethren Africans who are still suffering under foreign colonial rule. We reiterate that Ethiopia, in co-operation with the member-states of the Organization of African Unity, will always continue to give her full support for their just struggles to win their inalienable rights to freedom and independence, and to be masters of their own destiny. May Almighty God assist us in these endeavours.”