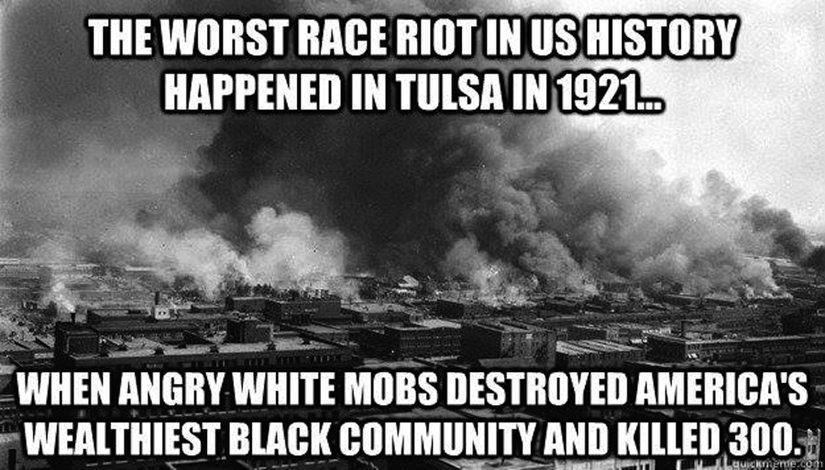 Greenwood is a neighborhood in Tulsa, Oklahoma. As one of the most successful and wealthiest black communities in the United States during the early 20th Century, it was popularly known as America’s “Black Wall Street” until the Tulsa race riot of 1921, in which white residents massacred black residents and razed the neighborhood within hours. The riot was one of the most devastating massacres in the history of U.S. race relations, destroying the once thriving Greenwood community

Within five years after the massacre, surviving residents who chose to remain in Tulsa rebuilt much of the district. They accomplished this despite the opposition of many white Tulsa political and business leaders and punitive rezoning laws enacted to prevent reconstruction. It resumed being a vital black community until segregation was overturned by the Federal Government during the 1950s and 1960s. Desegregation encouraged blacks to live and shop elsewhere in the city, causing Greenwood to lose much of its original vitality. Since then, city leaders have attempted to encourage other economic development activity nearby.

Many Black Americans moved to Oklahoma in the years before and after 1907, which is the year Oklahoma became a state. Oklahoma represented change and provided a chance for black Americans to get away from slavery and the harsh racism of their previous homes. Most of them traveled from other states, and Oklahoma offered hope and provided all people with a chance to start over. They traveled to Oklahoma by wagons, horses, trains, and even on foot.

Many of the black Americans who traveled to Oklahoma had ancestors who could be traced back to Oklahoma. A lot of the settlers were relatives of black Americans who had traveled on foot with the Five Civilized Tribes along the Trail of Tears. Others were the descendants of people who had fled to Indian Territory. Many Blacks were also from the various Muskogee speaking peoples, such Creeks, Seminoles, and the Yuchi, while some had been adopted by the tribe after the Emancipation Proclamation. They were thus able to live freely in the Oklahoma Territory.

When Tulsa became a booming and rather well noted town in the United States, many people considered Tulsa to be two separate cities rather than one city of united communities. The white residents of Tulsa referred to the area north of the Frisco railroad tracks as “Little Africa”. This community later acquired the name Greenwood and by 1921 it was home to about 10,000 blacks.

Greenwood was centered on a street known as Greenwood Avenue. This street was important because it ran north for over a mile from the Frisco Railroad yards, and it was one of the few streets that did not cross through both black and white neighborhoods. The citizens of Greenwood took pride in this fact because it was something they had all to themselves and did not have to share with the white community of Tulsa. Greenwood Avenue was home to the black American commercial district with many red brick buildings. These buildings belonged to black Americans and they were thriving businesses, including grocery stores, banks, libraries, and much more. Greenwood was one of the most affluent communities and it became known as “Black Wall Street.”

During the oil boom of the 1910s, the area of northeast Oklahoma around Tulsa flourished, including the Greenwood neighborhood, which came to be known as “the Negro Wall Street” (now commonly referred to as “the Black Wall Street”). The area was home to several prominent black businessmen. Greenwood boasted a variety of thriving businesses that were very successful up until the Tulsa Race Riot. Not only did black Americans want to contribute to the success of their own shops, but there were also racial segregation laws that prevented them from shopping anywhere other than Greenwood. Following the riots, the area was rebuilt and thrived until the 1960s when desegregation allowed blacks to shop in areas from which they were previously restricted.

Detroit Avenue, along the edge of Standpipe Hill, contained a number of expensive houses belonging to doctors, lawyers and business owners. The buildings on Greenwood Avenue housed the offices of almost all of Tulsa’s black lawyers, realtors, doctors, and other professionals. In Tulsa at the time of the riot, there were fifteen well-known black American physicians, one of whom, Dr. A.C. Jackson, was considered the “most able Negro surgeon in America” by one of the Mayo brothers. Dr. Jackson was shot to death as he left his house during the unrest. Greenwood published two newspapers, the Tulsa Star and the Oklahoma Sun, which covered not only Tulsa, but also state and national news and elections. The buildings that housed the newspapers were destroyed during the destruction of Greenwood.

Greenwood was a very religiously active community. At the time of the racial violence there were more than a dozen black American churches and many Christian youth organizations and religious societies.

In northeastern Oklahoma, as elsewhere in America, the prosperity of minorities emerged amidst racial and political tension. The Ku Klux Klan made its first major appearance in Oklahoma shortly before one of the worst race riots in history. It is estimated that there were about 3,200 members of the Klan in Tulsa in 1921

Around the start of the 20th century O.W. Gurley, a wealthy black land-owner from Arkansas, traversed the United States to participate in the Oklahoma Land run of 1889. The young entrepreneur had just resigned from a presidential appointment under president Grover Cleveland in order to strike out on his own.”

In 1906, Gurley moved to Tulsa, Oklahoma where he purchased 40 acres of land which was “only to be sold to colored”. Black ownership was unheard of at that time.

Among Gurley’s first businesses was a rooming house which was located on a dusty trail near the railroad tracks. This road was given the name Greenwood Avenue, named for a city in Mississippi. The area became very popular among black migrants fleeing the oppression in Mississippi. They would find refuge in Gurley’s building, as the racial persecution from the south was non-existent on Greenwood Avenue.

This implementation of “colored” segregation set the Greenwood boundaries of separateness that exist to this day: Pine Street to the North, Archer Street and the Frisco tracks to the South, Cincinnati Street on the West, and Lansing Street on the East. The segregation is pronounced in subtle landmarks. South of Archer, Greenwood Avenue does not exist in white neighborhoods.

Another black American entrepreneur, J.B. Stradford, arrived in Tulsa in 1899. He believed that black people had a better chance of economic progress if they pooled their resources, worked together and supported each other’s businesses. He bought large tracts of real estate in the northeastern part of Tulsa, which he had subdivided and sold exclusively to other blacks. Gurley and a number of other blacks soon followed suit. Stradford later built the Stradford Hotel on Greenwood, where blacks could enjoy the amenities of the downtown hotels who served only whites. It was said to be the largest black-owned hotel in the United States.

Gurley’s prominence and wealth were short lived. In a matter of moments, he lost everything. During the race riot, The Gurley Hotel at 112 N. Greenwood, the street’s first commercial enterprise, valued at $55,000, was lost, and with it Brunswick Billiard Parlor and Dock Eastmand & Hughes Cafe. Gurley also owned a two-story building at 119 N. Greenwood. It housed Carter’s Barbershop, Hardy Rooms, a pool hall, and cigar store. All were reduced to ruins. By his account and court records, he lost nearly $200,000 in the 1921 race riot.

Because of his leadership role in creating this self-sustaining exclusive black “enclave”, it had been falsely rumored that Gurley was lynched by a white mob and buried in an unmarked grave. However, according to the memoirs of Greenwood pioneer, B.C. Franklin, Gurley exiled himself to California. The founder of the most successful black community of his time vanished from the history books and drifted into obscurity. He is now being honored in a 2008 documentary film called, Before They Die! The Road to Reparations for the 1921 Tulsa Race Riot Survivors.

One of the nation’s worst acts of American Terrorism, the Tulsa Race Riot occurred in late May and early June 1921. On the day of the riot, 35 square blocks of homes and businesses were torched by mobs of angry whites. The riot began because of the alleged assault of a white elevator operator, 17-year-old Sarah Page, by a black shoeshiner, 19-year old Dick Rowland.

The community mobilized its resources and rebuilt the Greenwood area within five years of the Tulsa Race Riot and the neighborhood was a hotbed of jazz and blues in the 1920s. However, the neighborhood fell prey to an economic and population drain in the 1960s, and much of the area was leveled during urban renewal in the early 1970s to make way for a highway loop around the downtown district. Several blocks around the intersection of Greenwood Avenue and Archer Street were saved from demolition and have been restored, forming part of the Greenwood Historical District.