The world does not aid Africa – Africa aids the world!

Foreign developed nations often wax lyrical about their generous donations of aid to Africa. But a coalition of UK and African researchers has released research findings that illustrate how the continent actually loses over six times the amount it receives in aid.

As we often watch wealthy countries heap on themselves and each other generous portions of praise for helping ‘needy’ countries and using their donations to accelerate development in impoverished regions so as to end poverty, another scenario is playing itself out. This scenario is rarely reported.

Africa, the receiver of $30 billion in annual monetary handouts, is not only making nothing from the aid it receives but it actually loses $192 billion to the rest of the world within the same time frame.

Research published recently indicates that current practices within the continent tend to favour wealthy countries. These practices include tax dodging, the repatriation of multinational companies’ profits with their unjust trade policies, the costs incurred from climate change and the exodus of skilled workers. 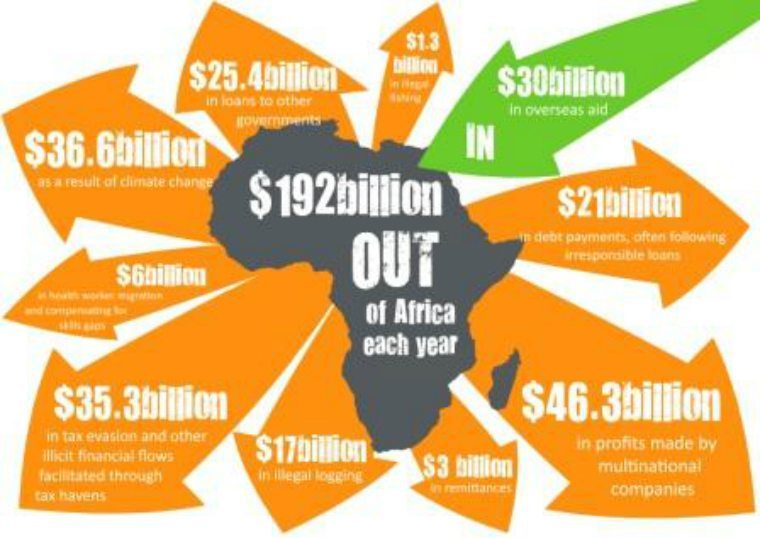 This means, basically, that if you take into account the money coming in through aid, investment and remittances ($134 billion), Africa is left with a $58 billion annual loss. To put this into perspective, the money that Africa loses each year is over one and half times the amount of additional money needed to deliver affordable health care to everyone in the whole world!

As you can see, it is Africa that is aiding the rest of the world – not the other way round.

“All those countries who keep their aid promises should be proud of what they’ve done” – David Cameron, UK Prime Minister.

Despite decades of public fundraising and aid, the end to Africa’s poverty is nowhere in sight. This “aid” is actually a smokescreen used to hide from public view the fact the it is the donors themselves who are perpetuating this cycle of indigence.

The report highlights that Africa is essentially not poor. A combination of inequitable policies, massive disparities in power and criminal activities perpetrated and sustained by wealthy elites both inside and outside the continent are keeping its people in poverty. The UK and other wealthy governments are at the heart of this theft.

For example, the continent haemorrhages $35.3 billion annually through the tax evasion and other dodgy financial flows enabled by tax havens. These tax havens are jurisdictionally linked to the G8 and the European Union and account for 70% of global tax haven investment. The UK has 11 tax havens under its jurisdiction!

Something is seriously wrong in this picture. It’s most often the resource-rich countries that show the most bleeding of finance. One would expect them to be displaying lower levels of poverty, but the opposite tends to be true. Out of one billion of the world’s poorest people, 33% live in resource rich countries. Which explains why 75% of the dozen countries at the bottom of theHuman Development Index (HDI) are rich in natural resources.