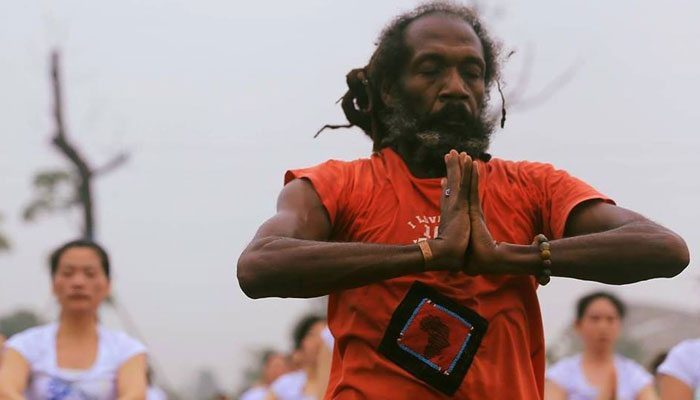 The Chinese New Year is the most celebrated holiday for Chinese. The festival marks the start of the New Year, which begins on the second new moon after the winter solstice and ends on the full moon 15 days later.

In observance of the Year of the Monkey, The Gleaner spoke with Jamaica-born yogi, healer, writer, artist, and poet,
about his experiences living in China.

A globetrotting divorcee and language enthusiast who calls himself “a citizen of the world”, the former Calabar High School student said, “I still attract the same attention today as I did upon arrival a decade ago. There are not many black people in China. Certainly, not others who have hair looking like mine,” he laughs.

“There is certainly an amount of curiosity. The city where I lived is a prime Chinese tourist destination, therefore, I do get the same attention today as when I first arrived. It is something I have become used to. A black man in China is different from a Chinese man in Jamaica. I suppose you can say I am a novelty,” Mair said.

Mair is indeed like candy to the Chinese eye. A striking, colourful, regal Rastafarian who stands six feet tall with long sweeping locks, he has a degree in architecture from Florida International University, and he is also a graduate in Chinese medicine from the American College of Traditional Chinese Medicine in San Francisco, United States of America.

Mair laughingly told The Gleaner, “People often want to take pictures with me, touch me and or my hair; some even want to take me home. Then there are some who would run across the street when they see me coming.”

Living in one of the most famous cities in Chinese culture and history, Hangzhou, Zhejiang Province, Mair explains how he moved to China.

“I was recruited to teach yoga in China after a fellow yogi and friend also moved there to teach. I seized the moment because of my lifelong love affair with Eastern philosophies, culture and history. I also find the Chinese language a very fascinating aspect of their culture.”

Mair, who has been studying Sanskrit for 10 years and teaching for three said, “The opportunity to teach yoga in China gave me the opportunity to verbalise Sanskrit in Chinese. Sanskrit is the language of yoga and it goes a long way back. It is an ancient spoken word. Years after my initial interest in Sanskrit, I began to learn Sanskrit is also the root to many other Indo-European languages. My desire to study the yogic ancient text and exploring life and different approaches to speech all became a part of the influence on my life’s journey which led me to China.”

The name Sasi was given to Mair by his Sanskrit master, Dr Ram Karam Sharma, and means the ‘rabbit in the full moon’, reflecting the majestic and brilliant qualities of the lunar cycle.

“Many people have wondered how I have learnt to master languages as a Jamaican,” said Mair, who also speaks French and Spanish. “I really wouldn’t say I have mastered any language, including English. I just have a passion to communicate and learn, so if learning another language gives me access to knowledge or allows me to arrive at a deeper understanding, that is the path I will pursue. Learning the naked language is sometimes not the most acceptable way, but I find it’s the most effective way to get an understanding of culture.”

Mair said the Chinese have embraced him. “I will never get over the feeling of being welcomed in China and the respect given to me. I have been overwhelmed by the feeling of acceptance and respect.”

With all his travels, does Mair ever miss Jamaica? The master yogi smiled, “Home is where the heart is. Each day I find this to be true. My yoga creates a magical balance moving between three different places – Northern California is so different from the rest of America and I feel at home there. Where I am in China really suits me. When I come to Jamaica – where my navel string is cut, where I was born and raised and with family here – it is as much qualification for being at home as you might need. I love moving among these three places because they balance my spirit.”

Having taught yoga for more than 20 years, he revealed, “I started yoga at age 15, growing up in rural Jamaica, so I guess you could say yoga found me, and since our introduction, we have never separated.

“Everything goes back to the self, and yoga is about self-discovery. Ultimately, the older I get, the wiser I become. When I was a teenager, I wanted to save the world, but you soon realise that if you work hard on yourself, you can really make a difference. Self-awareness is a constant journey. Yoga is about transformation and a spiritual journey.”

Referencing the similarities of Rastafari and yoga, Mair concludes, “I have an inter-relationship and interconnection between my understanding of Rastafari and yoga. There is no clash, they complement each other. I embrace Rastafari as a constant evolution, a constant journey into self-discovery. An ongoing of creation, it’s not something that was created and then put down; it is a constant engagement, which is evolving, so there is no need for any dogma or any ‘isms’. Yoga and Rastafari are both focused on finding inner peace, and I have peace practising both spiritual lifestyles.”

As for his resolutions for 2016, Mair said, “I have no time for monkey business.”