Intentional Genocide and Murderous Ploy to Sacrifice followers of the RasTafari Movement is on the law books on the island of Dominica today.

Twenty-eight years ago in December, the Dominica Parliament under the leadership of then Premier Patrick R. John passed an amendment to the Prohibited and Unlawful Societies and Associations Act 1974 (The Dread Act).

The original Act was passed by near unanimous approval by Parliament earlier in the year. And so began one of the worst chapters in Dominicas history with the severe repression of human rights on the Island. Under the Dread Act, individuals wearing dread locks and who appeared in public were guilty of an offense and subject to an arrest without warrant.

Young men found guilty of benign offenses such as taking one coconut from land that they did not own could face mandatory jail time without the right to appeal, if found guilty. The Act protected any civilian who killed or injured a member of the Dreads who was found illegally inside a dwelling house, from civil or criminal liability.

To date, no one has ever been prosecuted, held to account, or made to pay for the carrying out of these atrocious deeds. As far as The Dominican could determine the repressive Dread Act, although no longer enforced still remains on the law books in Dominica, albeit to our eternal shame.

At the time of the passage of the Act, the term Dread was used to refer to predominantly young men who practiced the Rastafarian religion, and grew their hair long and matted.

Other words that were commonly used during that time as outlined by Premier John to Parliament in what he referred to as Dread langageu A small motion (to walk away); a piece (illegal firearm); Babylon (society); endless concrete (city buildings); endless man (large crowds); itals (vegetables and food not containing meat or salt); leggobeast (woman not accepting of Dread ideology). 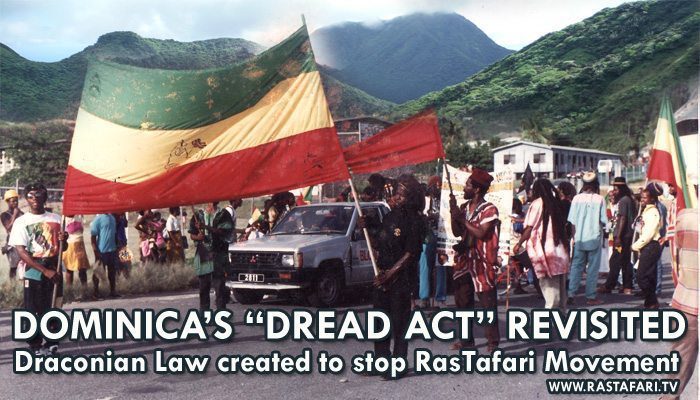 Roseau, Dominica (TDN) —- November 21st, 2011 is the 37th anniversary of the Unlawful Societies and Associations Act Popularly called the Dread Act.
At 12:30 PM, on Monday 21st November 2011, the Rastafarian community in Dominica will host a press conference at the House of Kaiso, head quarters of the Dominica Calypso Association on Valley Road in Bath Estate Dominica.

The law is one of the most draconian 20th to 21st pieces of legislation passed in any part of the world. The law which gave citizens the right to shoot other citizens on site without question, was passed by the Dominica Labour Party under the leadership of former Prime Minister, Patrick Roland John and was supported and unopposed by the official opposition the Dominica Freedom Party under the leadership of Mary Eugenia Charles.

The law aimed to stem the spread of and influence or the Rastafarian movement in Dominica by sentencing members to nine months in prison for the hairstyle dread locks or dreads or any memorabilia that identified them as Dreads as they were call at the time. This law resulted in the imprisonment of many youth, disrupting their education, family life and careers.
Along with the negative social and economic impact on those affected by the law, enforcement of the law proved to be brutal, resulting in death and injury to many dreadlocks, wearing individuals who fled to the hills for refuge. The law was briefly repelled and again reinforced in 1976 but has since then been replaced by the terrorist act.

In order to generate discussion on the dread act and promote reconciliation and healing, the Rastafarian community in Dominica asks the questions:
What led our society to pass, enforce and tolerate such blatant violation of human rights in the 20th century?

What was the impact on those who enforced the law, victims of the law, their families and the wider society?

How do we create opportunity for healing and recovery for victims who directly experienced the trauma of such harsh legislation?

How do we create a space for healing those who passed and directly enforced such legislation?

How do we as a society get engaged in undoing the damage of such inhumane legislation and its enforcement?

How do we prevent the future repeat of human rights violation in our island nation?

The Rastafarian community appeals to and invites individuals, institutions and organizations in Dominica including churches, unions, political parties, non government organizations, the bar association, scholars and to facilitate and be engaged in an ongoing process of exploring the issues related to the law.
To address the issues raised, answer the questions, document the series of events, individual and group experiences, the Pink & Blue Arts for Violence Prevention project will to produce a documentary film to be released on the 38th anniversary of the Unlawful Societies and Associations Act (the Dread Act) in 2012.